Pedaling for Parkinson's: Son Bikes for Funds in Father's Honor

When Aaron Staenberg's father Rick was diagnosed with Parkinsonism in 2011, their lifetime spent riding bikes together soon changed. Aaron found a way to bike for him, and benefit those struggling with Parkinson's disease.

For Aaron Staenberg, riding his bike has been a passion and a hobby for virtually his entire life. His father Rick taught him how to change gears, how to clip in and out of cycling pedals, and the general rules of the road. They biked hundreds of miles together. Until his father’s diagnosis with Parkinsonism in 2011. By 2015, Rick was no longer able to ride a traditional bicycle, and is no longer able to ride alone.

As the effects of Parkinsonism took its toll, Rick required more therapy and assistance. With a full-time job and three young kids, Aaron wasn’t able to help out as much as he would like. So he found a way that to use his passion for cycling to make a difference. “I was trying to think of something I could do to give back, to help out,” he explained when asked why he decided to start his Pledge It campaign. “I don’t have the time to help my Dad out as much as I’d like so I thought, ‘let me try to turn this into something, try to get some community involvement, try to support Parkinson’s and Parkinson’s awareness.’” 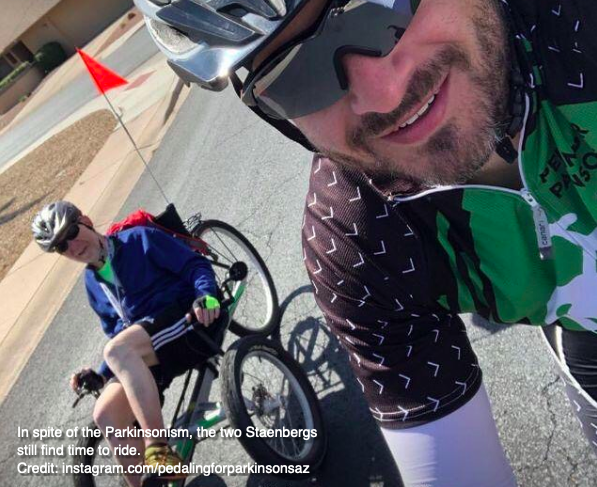 Soon after, he set the lofty goal of biking 4,000 miles for the year of his 40th birthday. With supporters able to pledge for each mile he biked, he coupled the mileage goal with the financial goal of raising $40,000, of which he's earned nearly $15,000 already.

“Four thousand miles is more than I’ve ridden in any calendar year. I figured it would be a challenge but not an insurmountable challenge,” Staenberg said. His family’s personal journey with Parkinson’s has given him the fuel to overcome anything blocking his path. “I’m doing this myself; this is a challenge I created myself to raise this money. I’m the one riding the miles, I’m the one doing the communicating. It’s something I’m doing to help the greater community. It’s very rewarding, even though it’s challenging.”

His beneficiary, the Muhammad Ali Parkinson’s Center, is where his wife— Jordan—is an occupational therapist and where his father visits regularly for activities and therapy. Because of these two meaningful connections to the Center, Staenberg knows first-hand the importance of the community support and education its programs provide.

“It’s a big commitment but it’s going well and I’m glad to be doing it. So far we’ve reached nearly $15,000. That’s a lot of money, even if I was to stop today, $15,000 supports a lot of programs at the Parkinson’s Center and impacts a lot of lives. Hopefully if we can keep getting the word out, and keep spreading what I’m trying to do, more money will come in and we’ll get closer to the goal.”