NFL Prospects Use Combine and Pro Days to Support Causes

Throughout the end of February and early March, select College Football players will be selected to perform in the NFL Combine and school Pro Days.

Over three hundred of the very best college football players will be invited to participate in the NFL Scouting Combine in Indianapolis, Indiana from February 26th to March 4th. Throughout the month of March, hundreds of others will participate in Pro Days hosted by their schools. At the Combine and Pro Days, these elite athletes will do their best to impress NFL scouts, coaches and general managers, primarily through their respective performances in a series of athletic tests.

For the fourth year in a row, fundraising platform Pledge It is giving these soon-to-be NFL rookies the opportunity attention provided by the NFL Scouting Combine and Pro Days for good. By allowing fans, friends and supporters to pledge donations for every bench press rep recorded, vertical inch jumped, pass completed and more, these prospects are raising money and awareness for causes they care about. The 2019 Pledge It NFL & Combine Challenge kicks off this week in Indianapolis.

At least fifty players will be participating in the campaign this year, including all eight new signees with Element Sports Group, and sixteen players from Athletes Trust Agency. Many of the players have chosen to represent and support causes and organizations that they have very personal connections to— including seventeen players supporting St. Jude Children's Research Hospital, and another ten-plus players representing Uplifting Athletes. Below are just a few highlights from this year's campaign:

Ryan Connelly, a standout linebacker from the University of Wisconsin, is using his performance at the NFL Combine to honor his mother. Connelly’s mother was diagnosed with lung cancer in November. He is inviting fans and supporters to pledge for every inch of his vertical leap to benefit the American Lung Association, and their mission to save lives by improving lung health and preventing lung disease through research, education and advocacy. As Ryan explains, "I’ll be training extra hard and jumping extra high knowing that with your pledges, every inch is more money raised in the fight to find cures and save lives for families like ours."

Twin to Twin Transfusion Syndrome is not something one really learns about unless you are pregnant with twins. This was the case with Mississippi State safety Johnathan Abram when his wife Brianna was diagnosed with TTTS at 24 weeks pregnant with their twins Harlee and Halle. Brianna flew to Cincinnati to have a necessary procedure to try to save both babies, but despite all efforts, Halle was stillborn.

Luckily, Brianna found a Facebook support group for families dealing with TTTS and through that, was able to connect with the Twin to Twin Transfusion Syndrome Foundation, which provided ongoing support. TTTSF has been working since 1989 to fight the disease and do everything possible to empower families and give them strength and positive encouragement to take action on behalf of their babies. In honor of his wife Brianna, his beautiful daughter Harlee, and for Halle, Johnathan is asking fans and supporters to pledge for every bench press rep that he completes at the combine. 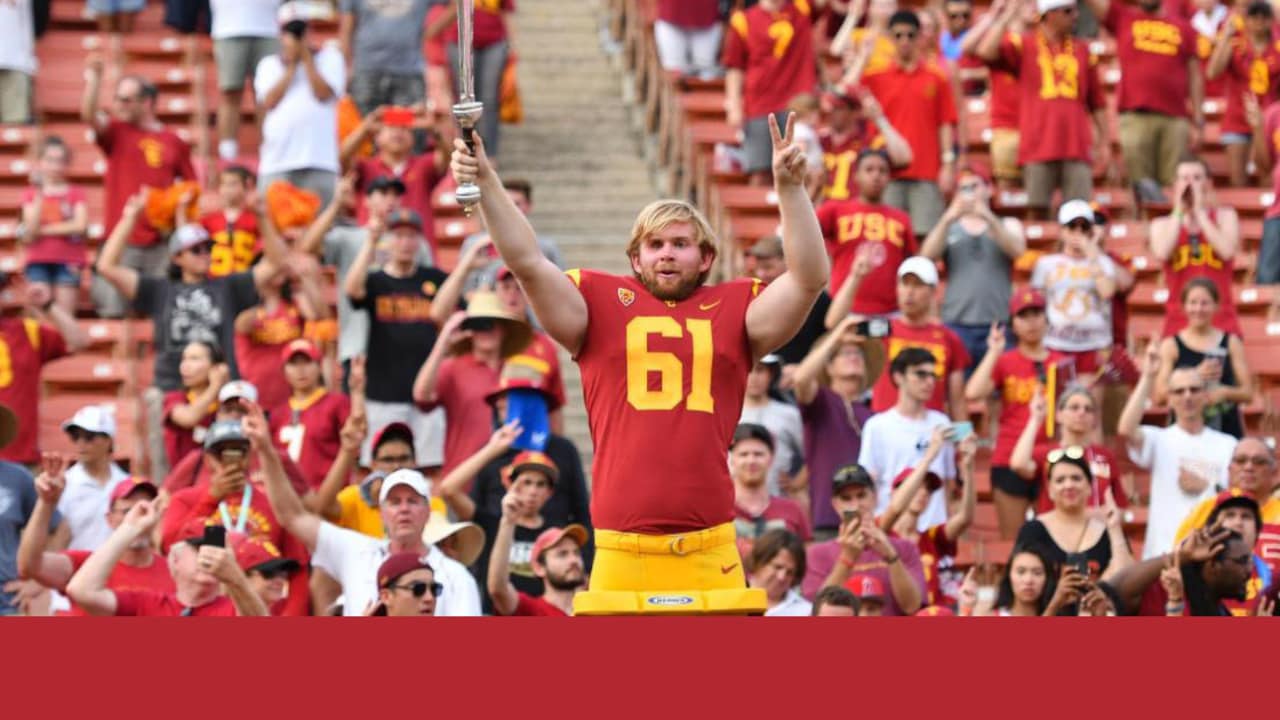 Jake Olson's story gained significant national exposure in 2017 when he took the field during USC's season-opening win against Western Michigan, nailing a snap on an extra point late in the game. Jake was born with retinoblastoma, a rare form of eye cancer, and lost his sight at the age of 12.

Jake's courage and dedication to overcoming adversity has made him an inspiration to many people around the world, and he is dedicated in his support of the rare disease community. His inspirational story continues when he takes the field during USC's Pro Day to use his performance to raise funds and awareness for Uplifting Athletes.

Those inspired by Jake can pledge for every bench press rep he completes to support Dr. Brenda Gallie's groundbreaking research on retinoblastoma through Uplifting Athletes.

The team at Pledge It is thrilled to work with these athletes for the causes that are most passionate to them. This year, the fourth working with NFL prospects, has already proven to be the most successful yet with over $50,000 raised. We look forward to continuing to partner with NFL hopefuls in the future.