My Campaign is Live. Now What?

You've chosen your beneficiary, connected your bank account, and customized your webpage. You are ready to start fundraising. But… now what? How do you actually raise money and run a successful sports fundraising campaign? Below is a guide that we’ve found helpful, and the strategies we’ve seen power some of our most successful fundraisers. 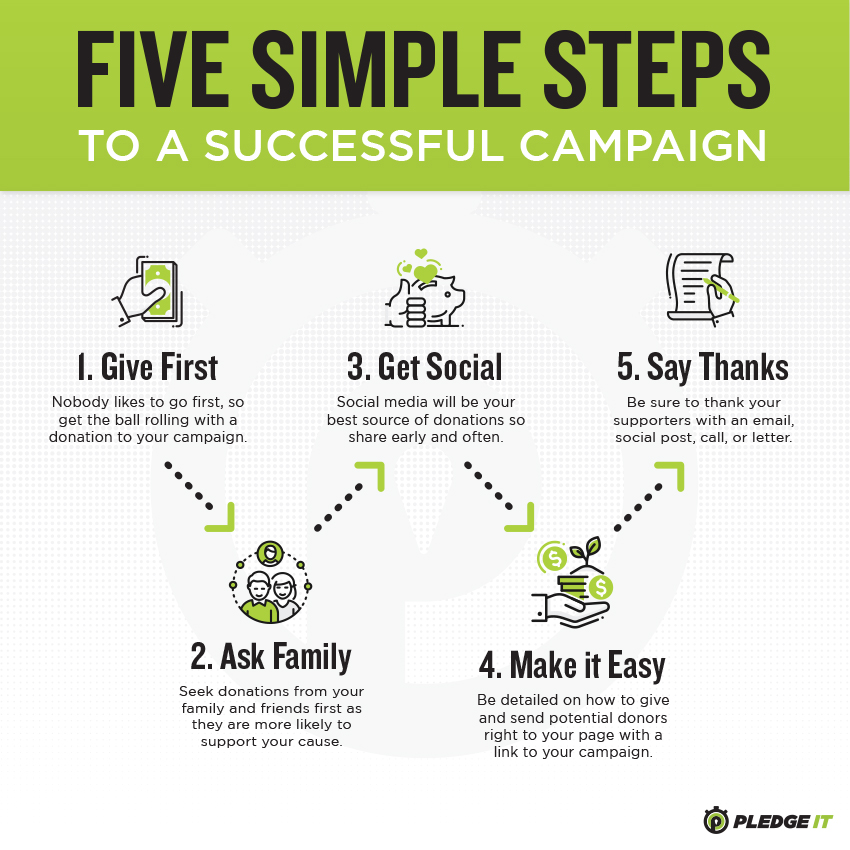 The first step to running a successful online fundraising campaign, before sharing with anyone, is to make the first pledge. Giving to your own cause first is an old, but true and trusted model. Think about street musicians; it’s a not-so-well-kept secret that the first few bucks thrown in the hat are from the musicians themselves.

It’s the same principle here: no one wants to be the first to give. With online fundraising it’s crucial that you give yourself. If you’re asking for money with zero dollars toward the cause, the immediate thought for anyone you shared your page with will be, “Why would I give if the person running the campaign didn’t?”

After you’ve given yourself, go to your closest family and friends. Your “Circle of Trust,” if you will.

Send them direct messages, not an email or social media blast. Give them a phone call, or a text. Tell them what you are doing and why this cause is so important to you. As our Director of Customer Experience JohnPaul Bennett put it, “If your family and friends won’t give to your campaign, you should probably choose a different cause.”

Once you’ve gone to your inner circle, go to your more casual friend groups. Your Saturday softball team, your book club, whatever your more loosely-connected social group is. This is where a bigger email blast is more appropriate, which Pledge It makes easy via its “Manage Supporters” feature. You’ll also want to ask that group to share with their audience. Maybe you know your friend Zach’s Dad, but not enough to give him a call and ask to give to your campaign. You never know who will give to your cause.

For example take human rights activist Jen Marlowe, who raised over $10,000 in her campaign to help four children suffering hardships in Gaza. “There were two people who gave a thousand dollars, which were my biggest donations and they didn’t even come from my networks,” she explained. “There were friends of friends who re-posted, and then people in their networks gave. It was pretty amazing.”

A lot of people think a simple share to their Facebook, Twitter or Instagram is the way to get donations to their campaign. That is the right thought, but it needs to be done correctly by stoking the fires first. When that is done right, it can be even more effective than email.

Only after you’ve exhausted your truly personal connections and raised some money is it recommended you post to a larger audience via social media. By now, you should have gotten some pledges to the point that you’re running a successful campaign. (Again, no one wants to give to the empty bucket). And when you do share, Facebook has proven to be the most effective medium, with 56% of givers surveyed stating that Facebook inspires them the most to give.

When you share, you should not necessarily expect a big influx of donations, regardless of the amount of friends or followers you have. The message should be more like “Check it out, living my best life training for the Boston Marathon. “Next month I’m raising money per mile I run for the St. Jude Children’s Research Hospital. Nearly a thousand dollars raised so far!”

You are sports fundraising. Make these updates regularly. Every training session, a month before the event, a week before, a day before, etc. You never know who might be inspired to give. Pledge It campaigns are also triggered to send out updates to donors at progress points such as 50 and 75 percent of the way toward the fundraising goal, so some of this work is already done for you.

Make it Easy to Give

Through each phase, inside to out, you should make it as easy as possible to pledge. If you have your mom on the phone, talk her through where to go, and how to give while you have her attention on the phone. (If she’s anything like this writer’s mother, she’s probably not the most tech-savvy!)

When making the bigger ask via email or text, again, be detailed with how to give. A Pledge It page makes it pretty obvious, with a big “Pledge Now” button on the right-hand side. But you can take the next step and be even more direct by posting the link straight to the contribution screen when you ask your audience for funds. Every Pledge It page contribution link will follow the same formula: pledgeit.org/yourcampaign/contribute.

It may seem obvious to thank someone who donated to your cause. Still, 68% of donors who have not given a second time cite lack of communication and/or gratitude as the reasons they left the cause.

Maybe you have no intention of running a repeat campaign. But you should still say thank you. It can be the difference between your donors feeling great about the contribution they made to your beneficiary or being left with a bad taste in their mouths.

This can be done with a simple email or social media blast. But for those who went above and beyond with their contribution, a phone call or a hand-written letter may be in order.

You’ve already put the work into finding a cause that you want to support and launching your website. Now take your campaign to the next level by following the guide above! We hope these tips prove to be helpful as you run your campaign.