Longtime friends Sam Salmirs and Ben Silverstein are hiking the Pacific Crest Trail. By inviting friends, family and supporters to donate per mile, they have made created a purpose greater than taking a break from everyday life. The hiking fundraiser has now raised over $5,500 to benefit impoverished nations.

When Sam Salmirs and Ben Silverstein need a break from the everyday routine, they get out of New York City for a hike. It’s a passion the two lifelong friends from Brooklyn Heights have shared in their first few years in the workforce as a way to unwind.

Though they got into hiking a little bit later in life after graduating from college in 2015, it has quickly become a huge part of their lives. “After we graduated, a few of my friends went to Oregon and did a four-day hike. And it completely blew us away, it was another side of life, it was so incredible,” Salmirs explained. “Ever since that day, our mentality is, ‘How can we find a way to hike on Saturday?’ It’s such an incredible way to get exercise, and completely set yourselves apart from everyday life.” 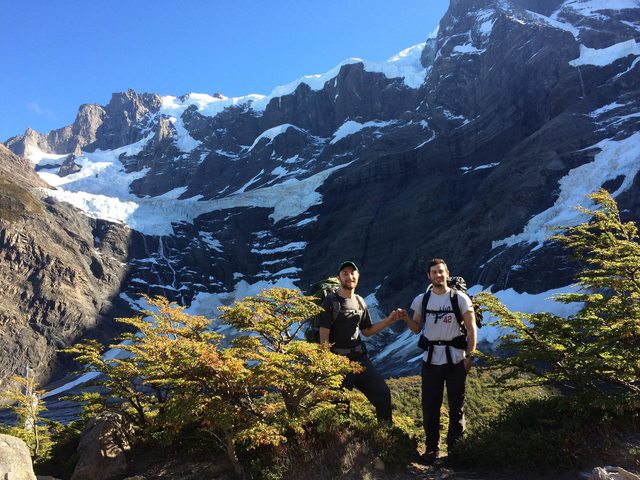 Now, they’re using this passion to fund another: philanthropy. The two friends are raising money per mile they hike of the Pacific Crest Trail. The trail runs from Canada to the U.S-Mexico border, spanning 2,653 miles down the Pacific Coast. The funds Ben and Sam earn will benefit Bridges to Prosperity, a non-profit that builds bridges in poor rural communities throughout the world. These bridges provide safer and easier access to education, healthcare and food markets. To date, <a href="https://pledgeit.org/ben-and-sam-s-pacific-crest-trail-attempt"target="_blank">Ben and Sam's Pacific Coast Trail attempt has earned over $5,500 in estimated funds.

Silverstein’s experience as a bridge engineer provided the connection to Bridges to Prosperity. For Salmirs, it was a lifetime spent around people giving back—particularly with his mom and the Bronx, NY-based Mercy Center— that inspired him to make the hike about something more than a break from the routine of everyday life.

The Mercy Center works to liberate families in the South Bronx from economic poverty. To see families just seven miles away from where he grew up struggling to access quality education or opportunity for economic advancement was eye-opening to Salmirs. “It was just a few miles away, but it was so different, it was like the other side of the world. It was then that it dawned on that there were many impoverished areas around the globe that could use support. Years later the Pacific Crest Trail Attempt was born.

“Living in New York City, we don’t get out hiking as much as we’d like,” Silverstein explained when asked why he was putting the rest of his life on hold to complete a five-month fundraising mission. “We decided to take this life adventure, mini retirement. We always see people pledging for marathons and things like that, so we decided to do a hike for a cause. So it’s not just us going on this trail, it’s about giving something back by doing it.” When they found Pledge It, Ben and Same realized they could perform a pledge campaign by hiking per mile, and the merger of passion and desire to fundraise was complete.

“We’ve been hiking frequently for the past few years,” Salmirs added. “Working a desk job can feel routine. We have an opportunity here to have five months of purpose, completely disconnect, spend some time in nature and in solitude. We’ll have something to push us every single day.”

As far as the rigors of the commitment are concerned, it’s often a mental hurdle that has hikers abandon the trail and go back to the comforts of a bed and warm shower. When these two friends hit that block, they’ll have the thought of those they’re helping to give them the extra edge to pursue.

“I definitely want them to know there’s a lot of support for them,” Silverstein said. “There’s a lot of potential for Bridges to Prosperity to keep growing, and building more bridges around the world. The best thing would be for the organization to grow as much as possible.”